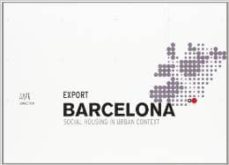 The Connection_ project aims to create a network of cultural connections between cities as a means of spreading the values of urbanism and architecture. A series of architecture exhibitions are the focus of this project, which also offers other events such as conferences and meetings between universities; intended to create synergies between the professional architects involved. Barcelona has become a brand recognized worldwide, of which more disciplines have contributed to the recognition of the city popping architecture and urbanism. One of the main elements of the 'Barcelona Model' is the quality of residential buildings. Currently a younger generation of architects has been able to address the issue of new housing programs responding to the new social demands and urban areas. The Connection_Export Barcelona project tracks new types and new ways to integrate social housing and urban public space, creating new synergies for urban real estate that, during the boom years, had been abandoned.

The district of El Raval, located in the medieval city quarter of Barcelona, was until recently one of the most densely populated urban areas in the world. Recent and ongoing regeneration schemes have dramatically altered the social, environmental and economic characteristics of some parts of the area.